Randy Hall has had a wild and raucous career in technology, spending most of his early adult years working in Silicon Valley for Intel Corporation in a variety of technical roles. Upon leaving Intel and the south bay, Randy moved north to Sonoma County in 2006 and has been a resident ever since. He's lived in Glen Ellen, Sonoma and Santa Rosa, and currently calls the neighborhood just south of Coffey Park his home.

In his career, Randy has been a software developer, moving into creating media in 2007 by taking over producing a little wine talk show in Sonoma called Wine Biz, turning it into a broadcast/podcast hybrid (way before it was easy to do) and renaming the show Wine Biz Radio. In 2011, Randy shifted again into creating film by attending the Film School SF (formerly San Francisco School of Digital Filmmaking) along with six others in his cohort. Randy launched his production company VOM Productions in 2009, and worked primarily on corporate and commercial work. His documentary, "Udderly Direct" was selected for the Sebastopol Documentary Film Festival in 2013, and he fell in love with the film festival and the town. In 2015, he folded up his production company and took over running the Sebastopol Documentary Film Festival as a staff member of the Sebastopol Center for the Arts. This was the same year Randy started teaching CS74.21C (Digital Post Production 3) at SRJC.

In 2017, Randy made another shift into becoming a full-time school teacher, joining the faculty at Analy High School in the West Sonoma County Union High School District as a Career Technical Education teacher in Arts, Media and Entertainment. He now teaches about 150 teenagers every year about the excitement of filmmaking and media making, and several of his students have gone on to careers in media themselves.

Randy very much loves his wife and three kids, plus a dog, two cats, three rabbits, and an Arizona king snake. There's never a dull moment around the house. 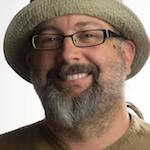