I was born and raised in San Francisco, and attended Lowell High School. Upon graduation, I attended the University of California at Berkeley during the tumultuous late 60's and early 70's, going abroad my junior year to study at Tel Aviv University, thus missing the most chaotic year of all--1969-1970--during which the entire campus (like other campuses across the country) shut down in a huge protest against the then-raging Vietnam War. My year abroad introduced me not only to an exciting new culture and language (Hebrew), but also to my lifelong passion of traveling.

After graduating from Cal in 1971 with a degree in English, I spent a year hanging out in San Francisco, imagining I would become the next Joan Baez,when, once when I was out traveling somewhere, my mother (!!) enrolled me in the secondary credential in English program at San Francisco State University. Figuring I'd give it a shot, I started the program, and discovered that I indeed loved teaching! And although I had planned on returning to live in Israel soon, I instead applied for and received the first teaching job I applied to, one at San Marin High School in Novato. I was 23 years old, only a few years older than my eighteen-year-old seniors, and got hired before the Labor Day weekend, leaving me three days to get my act together.

The rest is history. I taught happily at SMHS for the next six years, during which I met and married my husband of twenty-nine years, Andy. Three children later, I returned to SF State to pursue my M.A. in Teaching English as a Second Language, with an additional emphasis on Teaching Composition. Soon after, I ended up teaching here at SRJC, in both the ESL and English departments, and I'm still here.

I love teaching both because of the chance to interact with students and make a difference in their lives as they pursue their academic goals, and because it's a career in which my job is to read, think and write too, so I'm always learning and expanding, right along with the students. I love to see students "get it" and take off, either in their writing, or their reading.

Outside of work, I enjoy keeping up with my far-flung children; Jacob, currently working towards a doctorate at University of Wisconsin in the Geography department; Rebecca, a happy resident of San Francisco completing her training to become an MRI technician, and my youngest, Adina, currently doing a junior year abroad in Athens, Greece. I am an avid cyclist, swimmer, hiker, walker, and outdoors enthusiast, as well as a lover of books and writing, movies, plays, good music and good food. I love learning languages, and can get along in Hebrew, Spanish, French and Italian, to varying degrees. And I still like to travel, whether it's to do a language immersion in Latin America or to bike around Newfoundland or Northern Ireland. I choose to teach part-time because I can, and because this allows me to have time for all the other things I love. 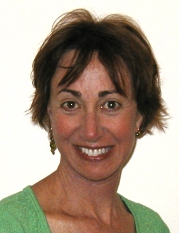