This guy can't hold a job!

Seems every time he gets settled, off he goes. Out of control. Got to see something-be-right-back and then, BAM! He's gone. Out the window.

Started right here in SR at Montgomery ('68) H.S., did a year at SRJC (likes of Bobby Seale showing up around campus, and then Anthony Burgess and Alan Watts--this campus was electric in 1969!), then off to Johnston College at the University of Redlands. Johnston was "experimental" back then: no tests, no grades, no curriculum. Survived on argument endlessly, writing endlessly, and evaluating everything. Endlessly.

Then Zaire (now the Congo). Three and a half years. Two years "in the bush" teaching on a black painted wall with a chip of white stone, watching the forest grow thicker around the huts and watching the black river water flow from inside a dugout canoe and loving the people who stood right there beside me, the greatest folk in the entire world for kindness and patience and generosity and beauty, and then a year and a half in the big city of Kinshasa watching the Pres of the Republic whiz past in his 20 car motorcade just to go to the bank.

Then San Francisco State University. M.A. in Comparative Literature, French and African literatures concentration. And a side course in Chinese Revolutionary Literature, which will figure in later in this ramble.

Then a couple of years at Indian Valley College as an ESL instructor.

Then--here it comes--two years in the People's Republic of China at the Wuhan University of Geological Sciences. 1983-85. The revolutionary literature comes back to haunt. But China in the early eighties was no fun. Harry Wu used to come over and talk to me, tell me stories about the list in the Wai Ban office of people who were allowed to talk to me--he wasn't on the list but he didn't care. What did he care? He's just spent 20 years in prison for trying to care so what were they going to do? Put him in prison? (Harry later came to the U.S. and was the darling of the Reagan anti-communist administration. Harry broke the story, with film, that the Chinese were cutting out prisoners' livers for transplants to powerful party leaders.) Interesting. But no fun. But interesting. Very, very interesting.

So back here, into SR again. And SRJC (ESL, then English, then just English).

Then the Czech Republic. Fulbright. For a year in Havirov. 18 klicks from the Polish border. 60 kilcks from Auschwitz-Birkenau.

And now back here again. Still looking. Curious. Looking. Got his boots on, ready to go.

All the time writing, and writing, and not keeping up with all this that's happening around him. Feeling like the fingers of his hands are wearing down to nubs trying to get it all down. And still, no immortality (so far, so good, however). No jabbing insight so great that blindness is a comfort. Not yet. And still, there's hope. It's not over yet. It may not even have started. And that's the tough irony.

When all you've got is your five senses and a little hunk of flesh inside for brain, there's no way to know if a clock is really on the wall. Or not. 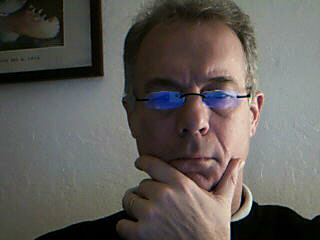