University of California at Los Angeles, Teaching English as a Second Language Certificate

I was born in Alameda California. When I was three, we moved to a 3-acre parcel between Santa Rosa and Sebastopol, into a rickety, leaky old house built in the 1860's (my mother's parents were aghast). But the land was good and for the next seven years, my father spent every spare moment building us a house on the same property. That's where I lived until I went away to college. I attended Analy High School, taking four years of Spanish, which I found extremely boring. A trip to volunteer in a Mexico City slum changed my perspective entirely. I found when I uttered those seemingly meaningless textbook phrases, people actually understood me! Doors were opened! I had experiences which, without Spanish would have been closed to me. I was hooked. I came here to SRJC for a year, continued to Brigham Young University for a BA and MA in Spanish and then to UCLA for a PhD in Hispanic Languages and Literatures, with an emphasis on contemporary Latin American literature, as well as a certificate in Teaching English as a Second Language. In the meantime, I served a 2-year LDS mission in Bolivia, where I also learned Quechua, the language of the Incas. The full-time job outlook in California was grim when I got my PhD, so I went back to school, got my MBA from Pepperdine, and spent the next 12 years selling computer hardware and software to Fortune 500 companies and teaching Spanish as an adjunct. I began teaching full-time at SRJC in 1996 and for a total of seven years served as Chair of the Department of Modern and Classical Languages and ASL.

In Fall of 2007 I took a semester sabbatical and traveled through South America. Wow! What an eye-opener.

When I was in college I studied German in Salzburg, Austria for a semester. I have been privileged as an educator to share this life-altering experience of study abroad with my students, three summers in Costa Rica and, most recently, Fall 2008 semester in Spain. If every student could study first hand a culture other than his/her own, I'm convinced we'd have a lot fewer problems in the world. Pretty idealistic but true nonetheless.

I live in Sebastopol with my husband, John. We have two children, both of whom graduated from college in 2013. Aaron is working in IT and Lily is getting her Masters in Occupational Therapy. My husband and I are just returning from a 6 month service mission for our church in Cedartown, Georgia. 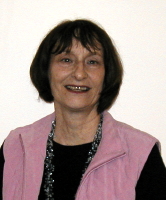