I was born in Los Angeles in 1949 and lived in the San Fernando Valley until 1975, excluding one year in 1972-73 when I lived in Vienna, Austria and traveled in Spain, Italy, France and England. In 1975 I moved to Michigan to attend graduate school. I lived in Pentwater, Michigan, for three years, a town of 900 people on the eastern shore of Lake Michigan. After six years in Champaign, Illinois, teaching (and playing tennis with David Foster Wallace, who later became a quite famous writer), I returned to California, first to San Diego County, then to Sacramento, and finally to Santa Rosa, where I have lived and taught since 1988. I currently live in Sebastopol with my wife Ann, who also teaches at SRJC. My daughter Molly is a freshman at the University of Washington and my son Eric is a Junior at Sacramento State University, majoring in music.
When I was 20 years old I experienced an inexplicable and powerful transformation, a single evening of sleep during which I must have been visited by angels or demons, for when I awoke (this was in December, 1969) I was a different person than I had been the day before. Every plan I had thought was set in stone lay in tatters at my feet; my life was moving in one direction one day, and another direction the next. I cannot explain this event, 45 years ago, but it has stayed with me all that time and, in the past 20 years, has informed my teaching. I am ever watchful and alert to radical change in myself and my students, and my approach to teaching reflects this awareness. I will retire from full-time teaching on May 24, 2015.

The works of Thomas Moore (Care of the Soul and The Re-enchantment of Everyday Life)
The Unseen in E. M. Forster's novels
The History of Consciousness and the Existential Predicament
The Psychology of Composition
Reading as Meditation
The adult Works of C. S. Lewis
Poetry of Mary Oliver and Billy Collins
The works of Marcus Borg
Personal Transformation in M. Somerset Maughm's novels
Spiritual Prophets (Buddha, Lao Tzu, Jesus, Tolle, etc.)

Transformation, if it will happen at all, will happen in the moment, with every breath we take. There is no future for the transformed consciousness, only the perpetual unfolding of the present. For me, the temporal container is each second, though of course I rarely succeed in living in such a small space. But that's my goal, and Blake's "All the world in a grain of sand/All eternity in an hour" nicely captures its essence. And with the gospel of Thomas, I believe that if we bring out of ourselves that which is true, it will save us, and if we conceal or ignore what is true in ourselves, it will destroy us. 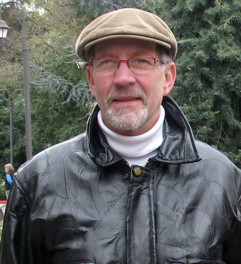